A 17-year-old male teenager is in a critical condition after being knocked down by a light-motor-vehicle near the intersection of Bosmansdam Road and Letchworth Drive in Edgemead, Cape Town, this afternoon.

ER24 paramedics were on the scene at around 13:30 along with the South African Police Services and many bystanders. The young man was found lying on the pavement having suffered critical injuries in the collision. He was treated with Advanced Life Support interventions, intubated, stabilised and transported to Tygerberg Hospital for further care.

SAPS as well as Metro Rescue were on the scene for further investigations. 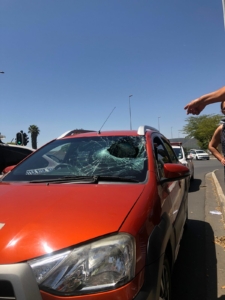 [KLEIN BRAK] – Man struck and killed by a truck.