Fifteen people have been injured in a collision between a taxi and another vehicle on the Black Reef Road in the Katlehong / Dinwiddie area last night.

ER24 paramedics were on the scene along with two other private ambulance services and GPG at 19:25. All of the occupants of the taxi, which had rolled onto its roof, had managed to self extricate themselves. A 50-year-old woman was found to have suffered serious injuries and was treated with Advanced Life Support interventions before being transported to Thelle Mogoerane Hospital for further care. GPG and the other two private services treated and transported fourteen other patients with minor to moderate injuries.

The female driver from the second vehicle had also luckily only suffered minor injuries and was being tended to by one of the other services on the scene.

The Fire Department was also on the scene. 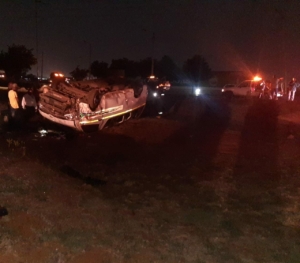