Making emergency care accessible to all our patients is a priority at ER24. And to realise this aim, our employees – from Contact Centre dispatchers to paramedics and management staff – need to know how to engage sensitively, empathetically and effectively with a wide diversity of people.

“In emergency medical services, you are exposed to anything and everything. Every call is different, every person you meet is unique and circumstances are never the same. You learn to multitask and take in everything and decide what you need to do. People who choose a career in the emergency sector have great empathy for others and want to make a difference,” says Luuca Beech, an ER24 Corporate Sales Consultant, who has 20 years’ experience in emergency medical services.

Luuca and his colleagues at ER24’s regional headquarters in Rivonia, Johannesburg, recently had the opportunity to make such a difference in someone’s life when they gave a teenager with mental disabilities an unforgettable birthday present.

Mikayla Kaka’s wish for her 16th birthday was to see inside an ambulance and Luuca, who knows Mikayla and her mother, Christine, from their local gym, kindly facilitated this by giving her a guided tour of the premises. 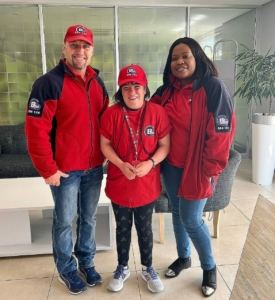 Says Christine: “Mikayla faces an array of daily challenges, and she experiences life in a way that is foreign compared to that of any neurotypical child her own age. Despite being 16, cognitively Mikayla has the mental capacity of a six-year-old. Her clinical, but not confirmed, diagnosis is the genetic disorder Noonan syndrome, named after paediatric cardiologist Jaqueline Noonan.”

Noonan syndrome is one of the more common genetic conditions, with an estimated incidence of between 1:1,000 and 1:2,500 births, explains Christine. The clinical features of Noonan’s typically include congenital heart defects, a failure to thrive, dysmorphic features, short stature, developmental delays, neuropsychological/behavioural issues, minor renal anomalies, bleeding disorders and visual problems.

Fortunately, her ER24 tour for her 16th birthday went without a hitch or any behavioural issues, despite Christine deliberately withholding Mikayla’s anti-psychotic medication that day as it often results in her being lethargic and withdrawn. As a result, Mikayla was very enthusiastic, a willing participant and very much present, taking in everything.

Both Mikayla and the staff involved were well prepared ahead of time and Christine describes the entire experience as “incredibly positive”.

“In spite of Mikayla suffering from sensory issues and extreme anxiety, not even the sirens or the lights of the ambulance could wipe away her smile. In this safe and caring environment, Mikayla managed to overcome one of her greatest and oldest fears: the fear of loud noises,” says Christine, adding that for the family this was an extremely large hurdle.

The positive impact this left on Mikayla has been significant, so much so, says Christine, that the gifted ER24 T-shirt and cap have been worn daily – even to bed – since her visit. “She loved every minute of the experience,” says her mother. 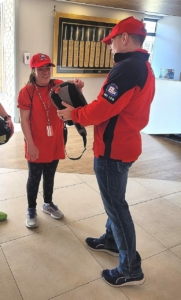 In Mikayla’s own words to Luuca in a WhatsApp video message, she said: “Thank you, Luuca. I liked the ambulance for my birthday… and thank you for spoiling me with clothes.” This was another positive outcome for a child with very limited expressive language.

Luuca made sure that Mikayla met a diversity of people on her visit to the regional office, intentionally including staff of different genders, cultures and ages into the tour. Says Luuca: “I didn’t want Mikayla to identify ER24 with one person specifically but for her to see the variety of people we have and how we work together as a team. This is so that in future if she ever needs emergency medical care, she will be comfortable receiving treatment from any medical crew.”

Of the staff, Luuca says: “Everyone was extremely accommodating. We needed to prep all the staff and be aware of the boundaries because of her disabilities. We have a lot of colourful personalities within the office, but we took great care not to overwhelm her during her visit. While we made sure we complied with all the health-and-safety regulations, we wanted to have as much fun as possible.

“As always, the ER24 team was fantastic, and nobody hesitated when I asked them to assist, by giving their time and contributing to a ‘goodie bag’ of useful corporate gifts for Mikayla. Once she arrived, I reassured and prepped Mikayla, by explaining to her where we would go, who we would meet and what might happen. Christine had also impressed upon her that we were entering a real-life, serious environment, which might include life-and-death scenarios. Mikayla was so well behaved, followed all our instructions and took in everything. When we went into the ER24 Contact Centre, a live call was in progress. I was delighted that she could experience the dispatcher talking to the person on the scene, hear the ambulance crew communicating and responding on the radio, and see the dispatching screens.”

ER24 staff clearly benefited from the visit as well. “Mikayla’s visit meant so much to us all. In our line of work, it is seldom that we get to meet up with our patients again. While most of our work is about saving lives, with Mikayla we had the privilege of enriching her soul by sharing with her a little bit of our world. For us, the highlight of her visit was to see how much she enjoyed the experience,” says Luuca. “At ER24, we have a strong family-oriented approach and a culture of caring. It is not just about ‘doing your job’. At ER24 we are passionate about what we do, and making a difference in any way we can is a priority.” 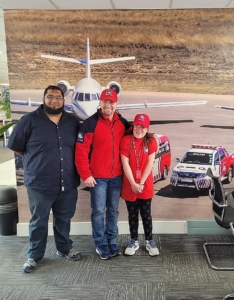 Christine says a special ‘shout-out’ must go to Luuca and his colleagues at ER24: Specialised Medical Services Co-ordinator for Gauteng Faheem Essop, Corporate Sales Consultant Mokgadi Maponya and Specialised Medical Services Co-ordinator Cassandra Gibhard. “These people went over and above the call of duty, for taking the time, care and patience to ensure a memorable visit for Mikayla,” she says. “Cassandra so patiently addressed all of Mikayla’s questions while showing her the life-saving equipment in the ambulance, explaining how each one was used, on whom and in what context.”

After this Q&A session, they made a trip to a make-believe emergency scene in the car park, during which Mikayla was allowed to sound the sirens. “This was so empowering for Mikayla to be in control of something she had previously feared so greatly,” says Christine.

Being on the spectrum means that Mikayla intuitively feeds off positive and negative energy alike, which can lead to emotional outbursts and unfortunate meltdowns. Christine says that any scepticism or anxiety that Mikayla may have perceived prior to the visit was defused by this “special team”.

“I truly believe that the exposure for both Mikayla and the ER24 staff alike was beneficial. Disability awareness needs to be highlighted. As much as Mikayla benefited from the interactions with the staff from various departments, I believe they too took away something positive from it too,” says Christine.

Raising a child with special needs like Mikayla’s is a daily challenge in South Africa and a very lonely journey for Christine and her husband, Fazel. Christine says, depending on the diagnosis, there can be little to no support for people with disabilities, especially mental disabilities. Suitable schools, facilities, support groups and even genetic testing is limited, the latter being only basic screening in South Africa. Christine notes that for parents seeking a confirmed diagnosis, their only choice is to go abroad, if they have the means for it.

“With the current exchange rates, consulting a laboratory abroad is out of reach for most South Africans. And as a result, many syndromed children go through life without a confirmed diagnosis. This too was the case with Mikayla,” she says. After extensive testing costing thousands of rands, including two blood tests – one sent to a genetics laboratory in the UK and the other to one in Finland, as well as micro-array testing, sequence analysis and testing for mutations, the results were still inconclusive. The family has since decided not to pursue further testing.

However, there are non-profit organisations like Rare Diseases SA and Els for Autism, that have assisted Mikayla. Rare Diseases SA was founded by Kelly du Plessis who has dedicated her life to helping those impacted by rare diseases. Kelly offers guidance and support to those impacted by rare diseases and their disabilities and raises funds for this cause. Christine also highlights the good work being done by the Els for Autism Foundation established by world-champion South African golfer Ernie Els and his wife Liezl, whose son has autism.

The visit to the ER24 regional offices had a significant impact on Christine as well: “We often get such negativity in this country, regarding our police force, ambulance and fire services, along with loadshedding, crime, poverty and the many other challenges we face, but after my visit to ER24 and seeing how the system works, I came away with renewed hope, feeling more assured now that there is a world-class service in place that can handle just about any emergency. Thank you, ER24, for giving us that peace of mind.”

[N17] – Truck and car collide, leaving one dead, another injured.